The project THERE - Theory and Empiricism of Religious Evolution is funded by the DFG in the Reinhart Koselleck program line. It develops a theory of religious evolution that is firmly rooted in religious studies (German: Religionswissenschaft). At the same time, it will give consideration to both the general theory of evolution and the theory of societal differentiation. The project is led by the sociologist and scholar of religion Volkhard Krech. 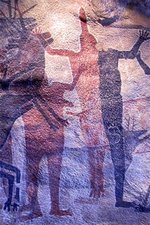 In so doing, the following aspects shall be taken into account:

In order to  accomplish these goals, the project falls back to the structural sciences – particularly systems theory, semiotics and informational theory. The expected outcome of this project will be a monograph on the theory and empiricism of religious evolution. To this purpose, the present website also serves as a platform for online pre-publication of individual chapters, in a form that invites outside comments, in order to collect valuable critical feedback before producing the monograph in print.